Too much fun... what's that mean?!!
It means The Color Run.
The Color Run is a 5k... each "k" you get "color" thrown at you.
The "color" is a cornmeal that is died pretty colors :)
They do Holi, a Festival of Colors in India, which one day I hope to experience... until then I have my Arizona Color Run.

Before the Color Run Arizona... 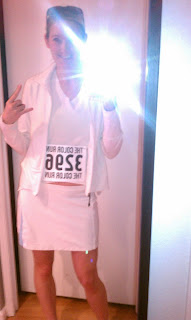 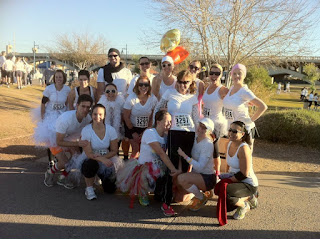 During the Color Run... 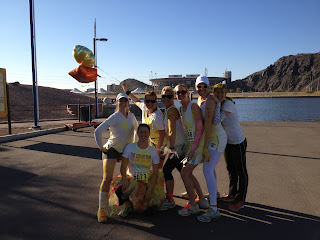 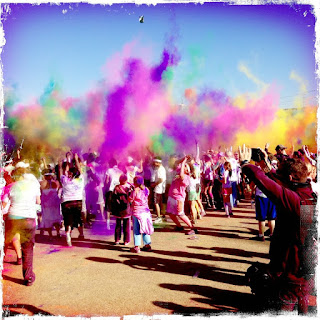 After the Color Run... 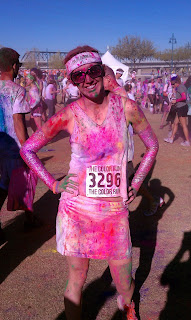 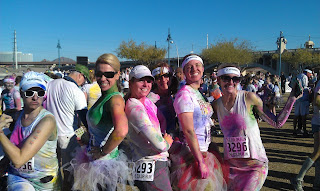 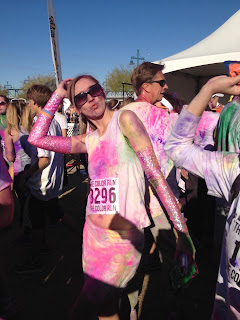 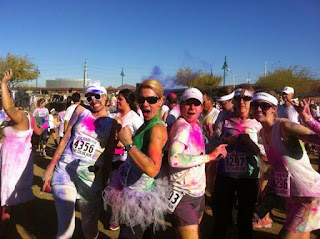 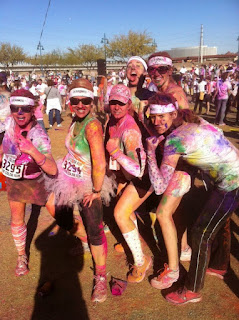 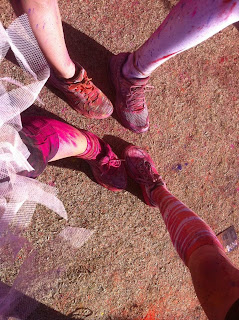 And... I leave you with the hottest picture of me EVER... 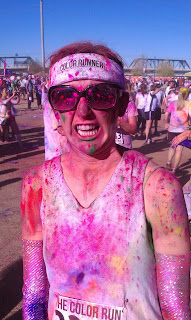 So far so good... This is the most races I have ever planed to race!

Not all of them are final but this is my wish list :-)


Am I missing a great race that needs to be added?

So I started my first week of Ultimate Body Boot Camp last week.
Every day I go I learn some new... which I LOVE!

Last Wednesday Richelle (our Boot Camp Goddess) gave us a challenge or more like homework. We had to write down the amount of sugar we ate and then she managed to tell us that we should not be eating more than 25grams of sugar a DAY. AND only half of that amount should be fructose (fruit sugar).

She told us that if we want to change our bodies we have to change.
Duhh, why didn't I think of that! ;-D

She has been giving us tips each day & she also gave us a meal plan, only if we asked though...

What I love about the meal plan that it tells me how many servings of fruit, protein, etc.. I should have each day so it is much more simple that telling me grams or lbs. I like easy so I don't have to think too much!! There is also a daily meal plan but again, I have to feed my husband too and he would not agree with much of it!

Self awareness.
I LOVE IT.
I have failed today... so far 33 grams!
Damn, sitting at a desk all day makes me want to eat candy like crazy. I need to figure this one out...
Healthy snack shopping here I come!!

It was SUPER hard but I loved it!

The first two miles were rolling hills, which was a perfect warm up because once we hit mile 2 we ran about 1500' up for the next 4 miles. It was tough and I walked/ran a lot. But I made it up! Then we circled around more mountains climbing & falling for a couple miles. It was SO MUCH FUN. I love the mountains. They are pretty!

THEN came the DOWNHILL. My calves tightened up more than I thought possible from about mile 9 until I crossed that finish line. Those 3.4 miles were the toughest of my life. I walked quite a bit but that hurt too. My calves are messed up. This has never happened to me before...

So I think my calve problem is from trying out a pair of Newtons on the Tuesday before the race. I ran a SLOW 5k in them.
Wednesday when I did hills for my last real run before the trail race the same thing happened to my calves, just not as bad.
So I rested & massaged.
Didn't work good enough though.

I went and got a massage Monday evening & it help a lot... didn't run Tuesday... it is now Wednesday & I did a Boot Camp, we went outside to do some sprints & MY CALVES ARE ALL TIGHT AGAIN.

Went down to the Miami Beach Half Marathon Expo on Saturday & ran into a guy who had Coconut Water for sale... from actual coconuts!! HECK YES!

Picked up the packet...

None other than the Beer Garden with my girl Lauren!!

Then off to hit up a few stores on Miami Beach...
Did you know these stores stay open super duper late... like 11pm!
Okay so by shopping I mean letting K take pictures of me =D

I stayed the night with my girl Lauren & her hubs J.
We stayed on South Beach... not a good idea, but who knew that!?!
We went to "bed" around 10ish and probably didn't get to sleep until 3 or 4 AM.
Yes, 3 or 4am.
These Miami Beach people KNOW how to PARTY.
Ugghh. But thankfully I woke up and felt pretty good.

Like the photo bomb guy? I would LOVE to know who this is!!

Trying to show my muscular  arms... but I need to remember I do NOT have them.
Yet.

It was an AWESOME Course!
I saw a double rainbow.
I ran up 3 bridges.
On the last bridge, about mile 9ish it was POURING down rain.
Could not even see... It was freaking awesome!!
It was basically the first time I had EVER ran in the rain & I loved every minute of it!!
Thankfully it only rained on that ONE bridge so after that it stopped and I was nice and cool.
Then around mile 11 I HAD TO PEE.
I did not stop, I should have stopped.
If I would have stopped my time would have been under 2 hours again.
BUT I didn't want to stop.
Then I had to stop & walk a lot because I had to pee or I was going to pee my pants.
There were NO port-a-potties.
Ugghh.

I made it to the end in 2:02:17.
Grabbed my metal.
Ran into the medial tent and used their port-a-potties.
RELIEF.

Then, the real treat... PITBULL

BEST after concert ever... on the beach to latino musica!

We partied hard!! Everyone was jumping & singing along!

LOOK AT THIS VIEW...

Miss me yet?! I know, I know, it's okay I'm here now. Everything will be alright. 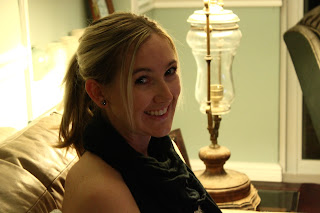